back to blog
March 29, 2013
TapJoy (53%) leads in cross-promotion networks, Flurry and Chartboost are chasing
byStijn SchuermansinTools

Building a great app is not enough – to get lots of users, those users have to be aware that you exist. As app stores focus on top apps, which amount to less than 1% of all available apps, discovery has become a major problem for app makers. One solution is to band together in a cross-promotion network: “advertise” apps within other apps, making it easier for users to discover similar apps to the one they are already using.

Cross-promotion networks (CPN) are used by developers both as a means for promoting their apps and monetising apps. When used for promotion purposes, there are numerous models out there, some being free, based on traffic exchange between apps, enabling developers to run low cost or free promotions. However, several CPNs operate on a cost-per-install basis, with developers paying for each user acquired. A special case of cross-promotion is incentivised installs, a practice that Apple has been trying to restrict on App Store.

Used by 7% of developers overall, usage of cross-promotion services is not very high and does not vary significantly by platform. Usage is higher among developers that develop games (13% of all games developers) and higher than average among developers working on comms & social networking apps (9%), entertainment apps (10%) and music & video apps (10%). These app categories are mainly addressing young consumers with limited purchasing power; using CPNs and incentivised downloads in particular, allows easy access to this target audience, which would otherwise not be able to acquire such apps. Developers who use CPNs tend to use one network (59%), but 18% use more than three networks. Overall, developers using CPNs will use 1.7 CPNs on average. 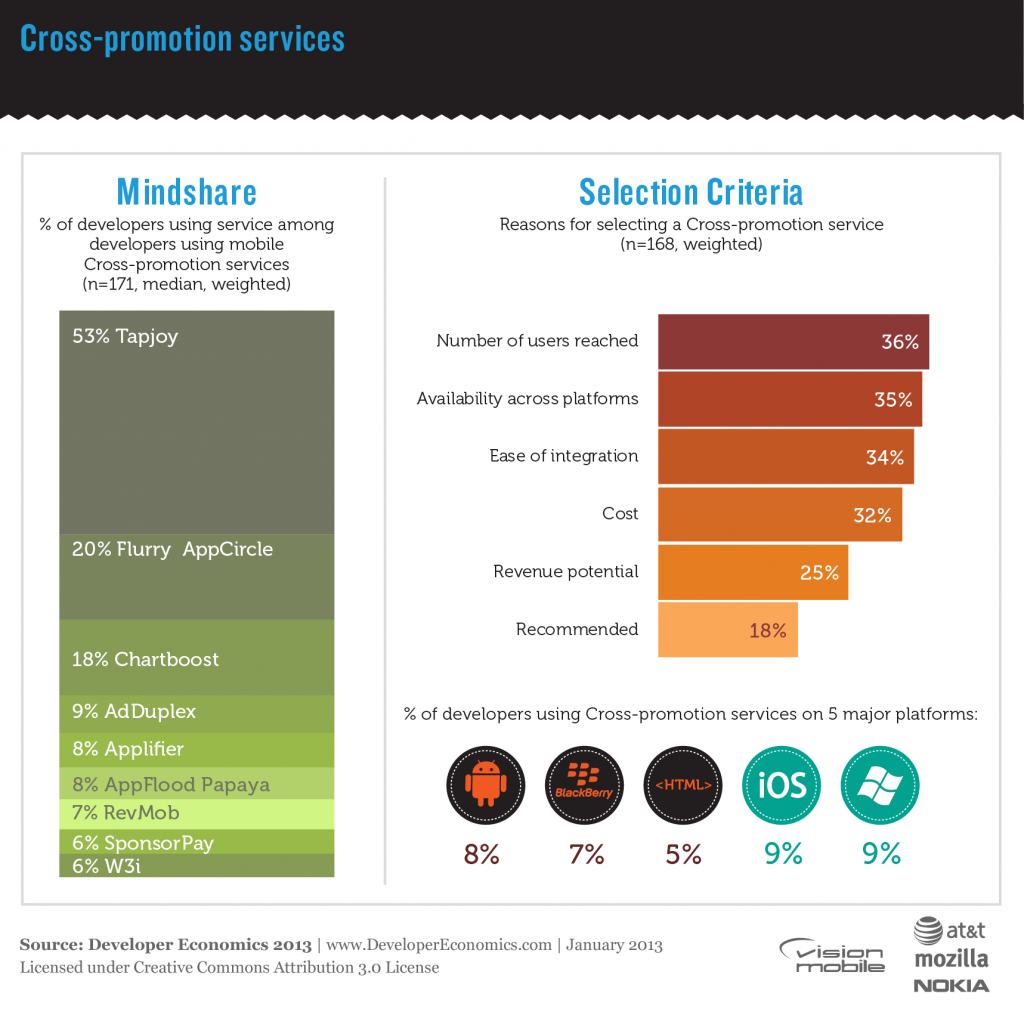 Tapjoy leads, with Flurry and Chartboost following behind

TapJoy is leading in the cross-promotion space, used by 53% of developers that use CPNs. Flurry AppCircle and Chartboost, follow at some distance and are competing for second spot (20% and 18%), while there are numerous other providers who have over 5% market share.

The most important selection criterion for cross-platform tools is the number of users reached (36% of developers using cross promotion networks) but it is only marginally higher than cross-platform availability (35%) and ease of integration (34%). Obviously, depending on how developers use these tools, the decision criteria may vary. For those developers who use CPN for promotion purposes, cost is important. We found that, on average, the typical CPI (cost-per-install) was $0.60 among iOS and Android developers, with no notable difference between these platforms. When used as a revenue source, the revenue potential becomes important, as indicated by 25% of developers using CPNs. About a fifth of developers rely on recommendations for selecting a CPN.

Which cross-promotion networks are other developers using?