back to blog
January 08, 2013
Which apps make money?
byAndreas PappasinBusiness

[This post by Andreas Pappas, Senior Analyst at VisionMobile, first appeared on the VisionMobile blog on 13 November 2012.]

[Andreas Pappas takes another look at the results of VisionMobile’s Developer Economics 2012 survey and comes up with interesting new insights on app monetisation: how does app revenue vary by app-category and by country? Is there a correlation between time spent developing an app and they money it makes?] 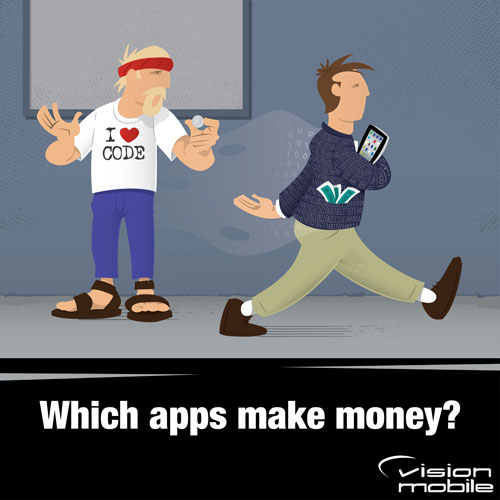 In Developer Economics 2012 we discussed app revenues and how they vary across platforms. We found that overall, around half of all app developers that are interested in making money did not earn a sustaining income, i.e. they were below the “poverty line”, which we drew at $500 per month per app. Of course the real poverty line will vary widely across countries and regions: while $500 per month may not be enough for a San Francisco-based developer, it could be more than enough for a developer based in Bangalore where average living cost is less than a third, according to Numbeo.

But what are those factors that determine how much money an app will make? In Developer Economics 2012 we looked into revenue breakdown by platform and revenue model and identified those platforms and revenue models that generate the highest average revenue per app per month. We are now revisiting our analysis to go a bit further and see what other factors matter when it comes to generating revenue. Throughout this analysis we have excluded statistical outliers, in this case the top 5% of revenue earners.

Solo developers earn a lot less than those working for clients

There are significant differences between developers that work on their own projects and those that work for clients, either as direct employees or contractors.

Developers working on their own projects reported average app-month revenues of just 30% of revenues reported by commissioned or employed developers. The caveat here is that developers working for clients may not have visibility of their clients’ app revenues so it may be the case that they reported estimated figures or that they, instead, reported their own revenue, which may be coming as a salary, irrespective of app revenue. 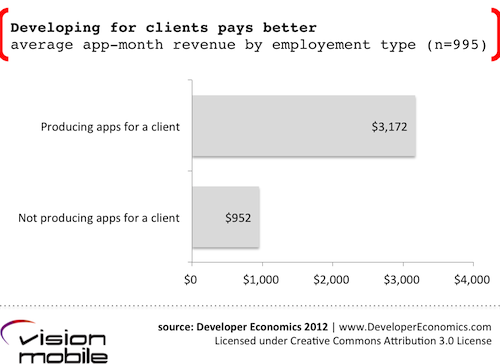 Looking into individual client industries and excluding those developers that work just on their own projects, we see a large variance between different industries and sectors. IT services & games have an average app-month revenue around $1,500, less than half of the average app-month revenue generated in banking/finance or real-estate, which is over $5,000. 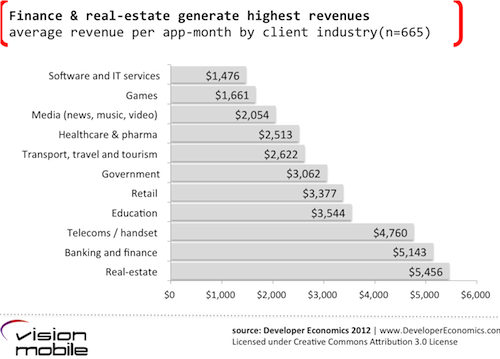 In the games and software/IT industries, revenues are, to a large extent, generated by app sales which is a core business activity. In other verticals, such as banking & real-estate, apps are just complements to the business, so developers’ revenues are not directly tied to app revenues.

It is worth highlighting that average revenues are significantly inflated by top revenue earners, i.e. they are not representative of typical revenues. However, they work well for comparisons between different industries.

We also looked at revenues across different types of apps. Again we removed outliers, i.e. the top 5% in each category. The clear winners here are comms & social networking apps such as Skype or WhatsApp for example, generating – on average – 20% more app-month revenue than the next best category, medical and fitness apps. 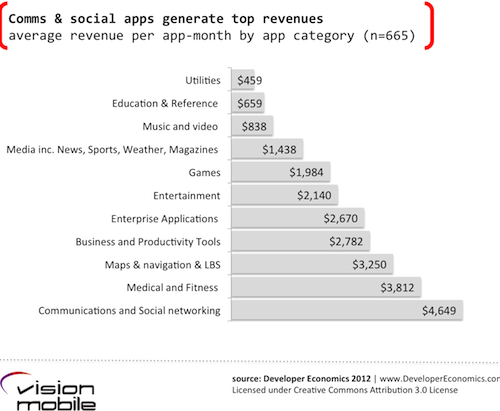 This can be attributed to the added value that comms and social services provide as the user base increases, i.e. the strong network effects specific to this app category. Utilities, on the other hand, exhibit very weak network effects as their utility is dependent upon user base, which seems to be quite fragmented, i.e. utilities mainly address the long-tail, niche user needs.

Next we looked to see how revenues per app-month are affected by the time it takes to develop an app. More development time could indicate rigorous testing and better app quality so, not surprisingly, the more time developers spend on their apps, the better the revenue potential. Apps that take 7-12 man-months make on average 11 times more money than apps developed in less than 30 man-days. 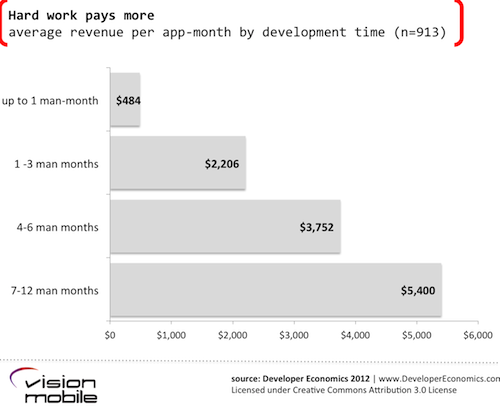 All the above graphs do not take into account platform effects, i.e. they are based on data across all platforms. This means that there may be variations by platform not shown here. For example, looking at development time vs. revenue for iOS and Android, we observe that there are quite a few differences in the relative values. To some extent, the particular distribution could be the result of our statistical sample, but it indicates that there are variations among platforms. 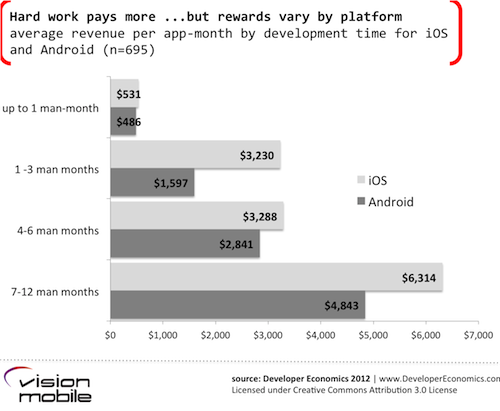 In the iOS vs. Android comparison, for example, we observe that once iOS developers overcome the 1-month limit, their revenue increases 6-fold while on Android the increase is about half, just a 3x increase. This may have to do with the revenue potential of each platform, which is clearly higher on iOS.

However, if we look at the 1 to 6 man-month period, we observe that there is no increase in iOS revenue but a huge increase for Android. This effect could be related to the fragmentation of the Android API and hardware, requiring more effort and development time in order to reach a larger user base. 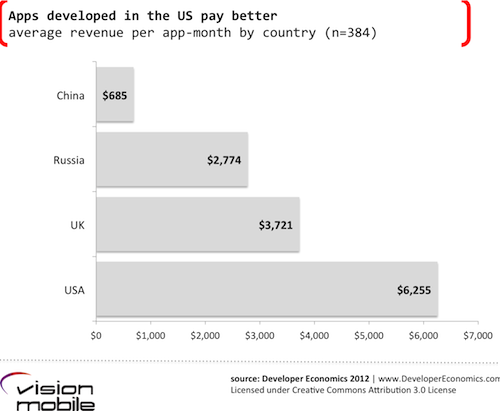 These differences have a lot to do with smartphone penetration per country, but also with regional socio-economic factors, familiarity with smartphones and consumption habits. However, developers based in a given country do not only target that country’s population. For example, 40% of developers in South America see high demand for their apps coming from North America. So there are other factors that come into play here, such as app pricing: developers in countries with lower per capita income may price their apps more competitively than developers in richer countries with higher living costs.

Apart from the factors presented here, there are multiple other variables that could affect app revenue, such as target markets, development experience and marketing channels used. We’ll continue digging into these factors and report our latest findings in the next report in the Developer Economics series and through our blog. The next report will be out in late January – so stay tuned!