[This post on App Store monetisation by Andreas Pappas, Senior Analyst at VisionMobile, first appeared on the VisionMobile blog on  31 July 2012.]

Apple and Google dominate the app store game – but only in terms of size. Senior Analyst Andreas Pappas discusses the key success factors for app stores, why Google is lagging behind and how Amazon fits in the whole picture. 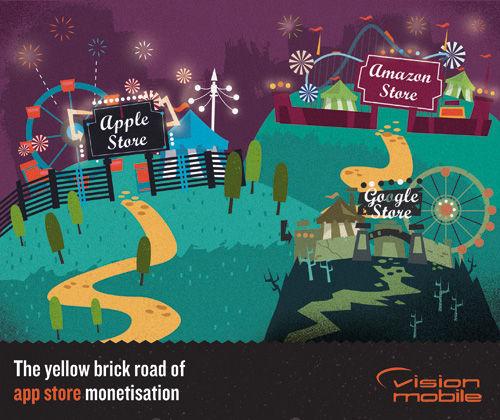 According to mobile app analytics firm Flurry, Apple apps lead the revenue table, while Amazon and Google apps generate 89% and 23% of Apple revenue, respectively. Flurry’s analysis only considered in-app purchases for the same app-basket for each platform. However, another report by game developers TinyCo, suggests that ARPU for one of their games is higher on Amazon than on Apple, while Google Play revenue is just 20% lower than Apple. Our analysis aims to explain the differences in monetisation and to identify key success factors in app markets.

App stores are key to an ecosystem’s health

Apple and Amazon have strong retail DNA and have been building a solid, direct business relationship with end-users for several years. Google has traditionally focused on B2B relationships with little exposure to retail. People associate Google with “free goodies” and not paid products as in the case of Apple and Amazon. Google has limited experience in creating an engaging shopping experience that would be on par with Apple’s and Amazon’s and this is evident across the entire shopping experience: from the storefront to product curation and check-out, Google is outperformed by its rivals. If Amazon and Apple app stores were high-street stores, then Google would be a flea market, although the upgrade to Google Play signals Google’s desire to move away from this model. It may be argued that app stores do not constitute a core revenue source for their owners so Google doesn’t need to be good at this since they still profit from ads. However, such a view is misleading and perilous: providing and increasing monetisation opportunities for developers is vital to an ecosystem’s success. Forget that and you can forget about your developers too.

Frictionless payment is a key element of any shopping experience, particularly so in mobile where establishing a billing account on the spot is a somewhat cumbersome process. Having access to most of their customer’s credit cards, Amazon and Apple have a direct billing relationship with their customers, a key element that Google presently lacks. This places Amazon and Apple in a better position when it comes to converting users to paying customers. If Google wants to increase conversion rates they must establish billing relationships with their customers and credit cards are not the only way. Carrier billing is an alternative method that can significantly reduce payment friction and create new opportunities in emerging markets, where credit cards are scarce. Google has already integrated carrier billing into Google Checkout in several markets such as Japan and S. Korea. In those countries developers offering freemium apps, such as Com2us, are seeing conversion rates of up to 10% while in the US where Google lacks carrier billing integration the conversion rate is only 3%. As smartphone share proliferates in emerging markets, carrier billing is bound to become increasingly important for app monetisation, creating opportunities for platform vendors, operators and developers.

It pays off to treat all platforms as equals

Developers’ attitudes towards the platforms they develop on have a significant impact on monetisation: the amount of time and effort that a developer spends on each platform will reflect on app quality and user experience. A developer focusing most of their effort on iOS may not be able to provide a similar level of quality for the same app ported to Android. As game developer TinyCo points out, when they were spending most of their time developing for iOS, iOS monetised better than Android. Their Android versions were simply not as good as the iOS versions, hindered, to some extent, by increased Android fragmentation. They managed to change this by building an optimised cross-platform game engine that allowed them to code once for both platforms. As a result they experienced increased conversion rates for both Amazon & Android, on par with Apple figures. In summary, it pays off to invest in each platform you develop on. If you cut corners, this will reflect on your profits.

To some extent variations in monetisation depend on demographics: Apple’s high-end device mainly targets high-spenders rather than less affluent emerging markets, while S. Korean teenagers are mad about games. Also, different devices lend themselves to different user experience: a Kindle Fire is likely to attract more in-app content purchases than a Samsung Galaxy Mini. It is vital for developers to identify and target the right market and not expect their apps to monetise uniformly across platforms and market segments. However, before one blames demographics for their app’s poor monetisation on one or the other platform, they should ensure that they have provided a level playing field: is the user experience the same? are in-app purchases easy on both platforms? is one platform lacking some features? As demonstrated in the case of TinyCo discussed above, the target market for a particular app can have a uniform behaviour across platforms if the developer invests the time and effort to provide a consistent user experience.

In Developer Economics 2012 we asked developers to assess monetisation of their main platforms and Blackberry came out on top in terms of average revenue per app-month, with 4% more revenue per app-month than iOS. Android revenues were 75% of iOS revenues, which is closer to the figures provided by TinyCo than to those provided by Flurry. However, Flurry’s figures only concern in-app purchases, a revenue model that is much less popular on Android (used by 20% of developers) than on iOS (used by 36% of developers), which could explain the large variance in terms in-app revenues for the two platforms.

The discrepancy in the figures presented across different studies suggests that there are several ways to look at monetisation potential. For example, in the Developer Economics 2012 research, while Blackberry topped the table on average revenue per app-month, on average, a higher share of iOS developers earned over $500 per app-month than Blackberry developers, i.e. income distribution was fairer on iOS. (If you’re interested to see how other platforms fare in terms or revenue per app-month, check out our Developer Economics Visualisations – 19 interactive graphs showcasing key data from the research).

It is clear, however, that Google Play is lagging behind Apple Store and Amazon in terms of monetisation and there is no evidence to the contrary. If Google and Android developers want to reduce the monetisation gap, they need to address the fundamental issues discussed above: improve the shopping experience, reduce payment friction, treat platforms as equals and target the right audience.