back to blog
April 29, 2013
The state of App Search Optimization (ASO)
byRegina LeuwerinBusiness

The reason why ASO is getting so much attention right now is because in today’s charts-driven app stores 10% of apps gets 90% of downloads. For developers, the only effective mechanism to catch attention is buying large amounts of app installs to catapult their app into the top 25 charts where people look for inspiration. But this approach has become very expensive as app install prices soar.

Indie developers who have limited resources struggle to compete and get their app in front of users’ eyes. At XYO, our goal is to change this and enable long-tail app discovery by helping users discover what they want even though they can’t express it. To build our site XYO.net we looked into search behavior to understand how people find apps. What we learned is that the majority of users has no real concept of how to search for apps and no idea about the vast supply of great apps out there, because they can’t see them. 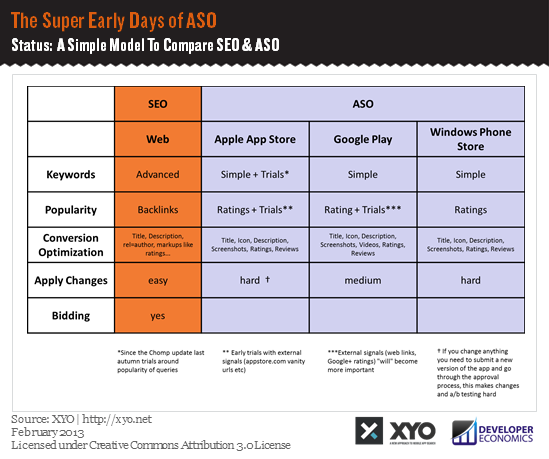 To optimize for search it’s important to understand how users are searching. On the web, there is SEO as a proven tool for which countless SEO companies provide rich insights, and tracking success is easy. For mobile apps however, it’s mostly guesswork. “These are the super early days of ASO”, said Tomasz Kolinko founder of ASO specialist Appcod.es. App Store Optimization (ASO) at the moment boils down to optimizing a list of keywords for queries that users are likely to type.

So how do users search? Based on our data on XYO.net and by looking at the publicly available studies by Chomp (acquired by Apple last year), we have identified four types of users in app search.

Our main findings conclude that app search is dominated by vaguely expressed intents and very generic queries. Users are inexperienced in how to find apps and have difficulties navigating cluttered app stores.

80% of user searches are generic category or interest searches 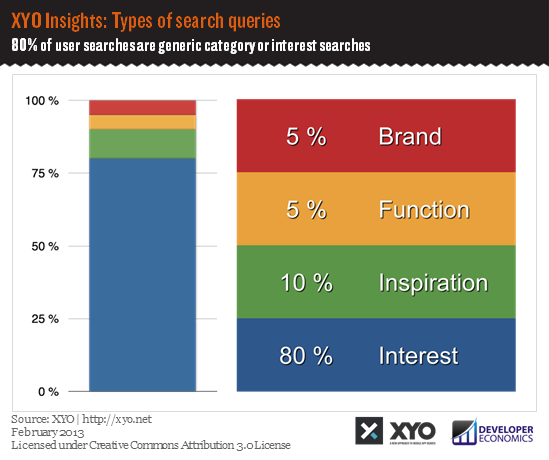 Most app searches happen with only a generally expressed intent. The majority of users (around 75%-80%) type general app categories into the search box. Examples of such categories are ‘social networking’, ‘education’ or ‘racing games’. Our findings are consistent with what app search company Chomp was publishing in its Monthly App Search Analytics study.

Around 10%-15% of all search queries look for simple inspiration: These users either type ‘games’ or ‘apps’ into the search box or add adjectives like ‘new’, ‘free’ or ‘fun’. Examples of such queries are: ‘addictive games’, ‘fun games’, ‘free apps’, ‘new apps’.

Only 5% of all users seek specific app brands or titles. Our data and other sources indicate that while some users are aware of mainstream brands like Angry Birds or Facebook, other mobile brands are mostly unknown.

For apps there is another category: functional app searches where the query describes what the user wishes to achieve. Examples of such searches are ‘crop photos’, ‘block calls’, ‘view movies’. Those functional queries are super important for classic web-based SEO – in mobile app search they are marginal at around 5% of searches.

Optimizing search for users who don’t know how to search

App Store search is based on app title and a keyword list. For Google Play the app description also counts, which opens up more opportunities for developers to add seasonal or trending keywords (e.g. ‘easter’ or ‘gangnam style’).

In general, it’s advised to use a keyword tool such as appcod.es, MobileDevHQ, SearchMan , and appnique.com. These tools give an idea of keywords competitors are using and where the sweet spot of high search volume and low competition lies for a specific app.

“Longer phrases are 70% of search volume on the web (indicator), they’re less competitive, and probably see higher post-click conversion (download) rates because the user explicitly searched for ‘free video poker game’, Niren Hiro, CEO at SearchMan told us. His conclusion: Developers can take steps to get the No. 1 rank under each of their ‘long tail’ keywords. That is, developers can optimize their rankings for keywords that will give them better results on the App Store when users go searching for certain kinds of apps. Optimizing for the long tail is key, because generic keywords will have high search volumes but a lot of competition and often lower conversion.

“We go from low(er)-volume, high-conversion keywords (such as ‘golfcoaching’), all the way to what we call secondary and tertiary market keywords, like ‘coaching’ or ‘sports’. Conversion for branded and function searches are likely to have higher conversion rates than inspiration or interest searches – and interest searches may have even better conversion rates than inspiration searches,“ explained Patrick Haig, VP, Customer Success  at MobileDevHQ. If history from the web will repeat itself, then it will become cumbersome for users to browse results, and they will start entering more descriptive phrases to get relevant results fast.

Apart from optimizing the keyword list, an app’s title is of utmost importance. We recommend including the most important keywords in the title to get found.

When users browse search results, two things matter most to increase conversion: app descriptions and screenshots. Over and over again we see the first three lines of description wasted by developers babbling about achievements that are meaningless to new users. Sure, a “Game of the Year” award is great news – but it’s secondary information as long as users don’t have a clue what the game is about. That’s why the app description should explain what the app does in the ﬁrst 2-3 lines. Bullet points can be used if necessary, as well as precise and short copy. Later in the text authoritative reviews can make sense to build trust, especially for Android where this text is also indexed for search. “For Google Play, it’s even better if you can include reviews that include targeted keywords,” said Patrick Haig.

Screenshots have gained relevance significantly and are a popular medium for developers. Users rely on screenshots to see if they like the look and feel of an app they’re about to download, and –again– to find out what this app actually does. Jai Jaisimha CEO at Appnique: “Moment of truth: iOS6 design increases importance of the screenshot because that is mostly what they see in the App Store client on the phone.” That’s why adding explanatory text is useful – and developers should get creative about it. Patrick Haig: “Treating screenshots like a stop-motion commercial can be powerful.”

Once a user has downloaded an app, ratings become priority because they are crucial for ranking: “We have an article here from Inside Mobile Apps that illuminates how important ratings are, segmented by each store (Google Play and iTunes). Also, it’s becoming even more important for publishers to improve upon their current version rating, as that’s the only rating seen by a searcher in-device (i.e., searching on their iPhone or iPad). Users have to dig in order to see the All Versions rating, which just doesn’t happen,” Patrick Haig from mobiledevHQ told us.

Though important, ratings are not that meaningful to base a download decision on: The average rating is 3.8 making it difficult to see the nuances within the star rating system. To increase conversion, internal and external reviews are getting more and more significant. Being proactive in asking for reviews can save a lot of pain: Prompting users for feedback makes them convey a problem before they post a negative review, recommends Appnique.

At the moment, a big trend in app store optimization (ASO) is trying to overcome the obvious discovery problem by stuffing app’s titles with keywords, longer descriptions or almost complete sentences. The race for the best phrases keywords is in full swing. Obviously user experience will suffer in the process if keyword optimization will be used too excessively by a large number of developers. A backlash might be the result, similar to when Google punished some of the shadier SEO practices with their Panda update.

The ASO tips presented above are not meant to be a ‘silver bullet’ for app discovery. ASO is a useful set of techniques used to increase discoverability through keywords, complementary screenshots and –most importantly– understanding how users are looking for apps. But it’s just one of many approaches to attract attention in a crowded app store, the main one being: having a great app that’s worth discovering in the first place.