back to blog
January 30, 2013
PhoneGap and Appcelerator lead developer mindshare across tens of CPTs
byStijn SchuermansinBusiness

CPTs can be used to develop native, hybrid and web apps and come in several technology flavours: JavaScript frameworks, App factories, Web-to-native wrappers, Runtimes and Source code translators. There are over 100 CPTs that we identified in our Cross Platform Tools 2012 report.

Cross platform tools are most popular for developers focusing on HTML development, with 38% of of them using CPTs for development. CPTs and particularly JavaScript frameworks and Web-to-native wrappers, provide a relatively smooth transition to mobile apps for web developers: in our Cross-Platform Developer Tools 2012 report we found that 60% of developers using CPTs have over 5 years experience in web development. Usage of CPTs is popular among iOS developers, while usage among Windows Phone developers is much lower, presumably due to historical lack of support for the iOS platform from CPT vendors and Microsoft’s financial incentives for the creation of native apps. 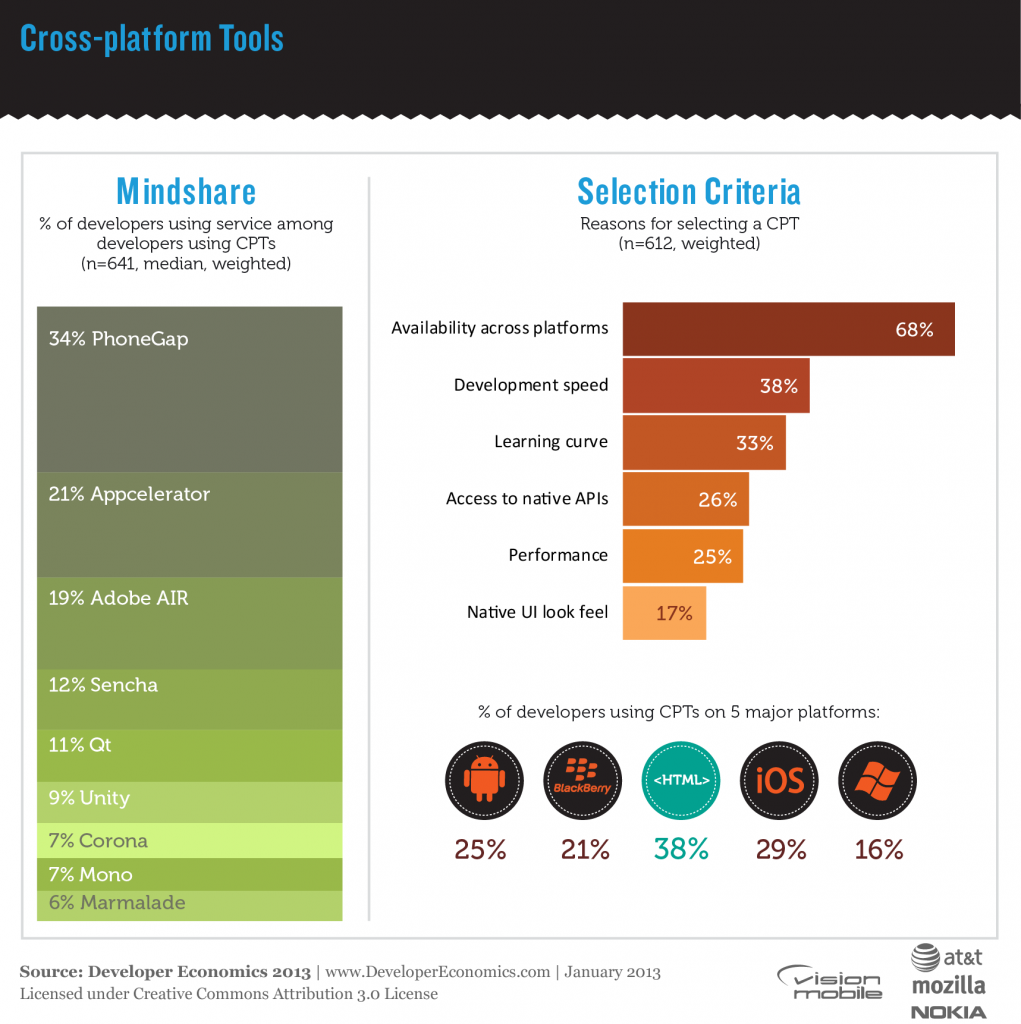 PhoneGap tops CPT rankings, used by 34% of developers, followed by Appcelerator and AdobeAir with 21% and 19% developer mindshare respectively. With over 100+ cross platform tools available, the choice for developers can be a challenge. Choosing between CPT technologies is not always straightforward (i.e. whether to go for a web-to-native wrapper or a JavaScript framework). Moreover, developers need to try out a cross-platform tool to see if it aligns with their needs in terms of performance, learning curve, access to native APIs or look & feel. It’s never a black or white decision.

The most important selection criterion for CPTs is their availability across platforms. Due to their deep platform integration, CPT tools support iOS/Android platforms first, and others secondly. Beyond cross-platform availability, 38% of developers using CPTs select their tools based on development speed and 33% based on the learning curve. Since CPTs aim to expedite and facilitate development across platforms, they should provide a clear advantage over native platforms when it comes to speed and ease of development to justify their use. Amidst differentiating features for CPTs are access to native APIs, performance optimisation and the ability to reproduce native UI elements on each platform.

Which CPTs are other developers using?

Find the best CPT for you!