back to blog
April 17, 2013
Parse leads with 28% but competition for second spot is heating up as BaaS rises in popularity
byStijn SchuermansinTools

As mobile apps become more sophisticated and expand their user base, the requirement for remote storage and user management becomes more important in terms of both functionality and scalability. This capability is usually provided at the backend that manages the application data. Off-the-shelf mobile Backend-as-a-Service can save a considerable amount of time for developers that require backend support for their apps. At the very basic level, mobile BaaS services offer a managed, cloud-hosted database that scales as the user base grows. All BaaS services provide additional functionality on top of this basic layer that may include user management, push-notifications and large-file storage among other.

Backend services used by 14% of developers 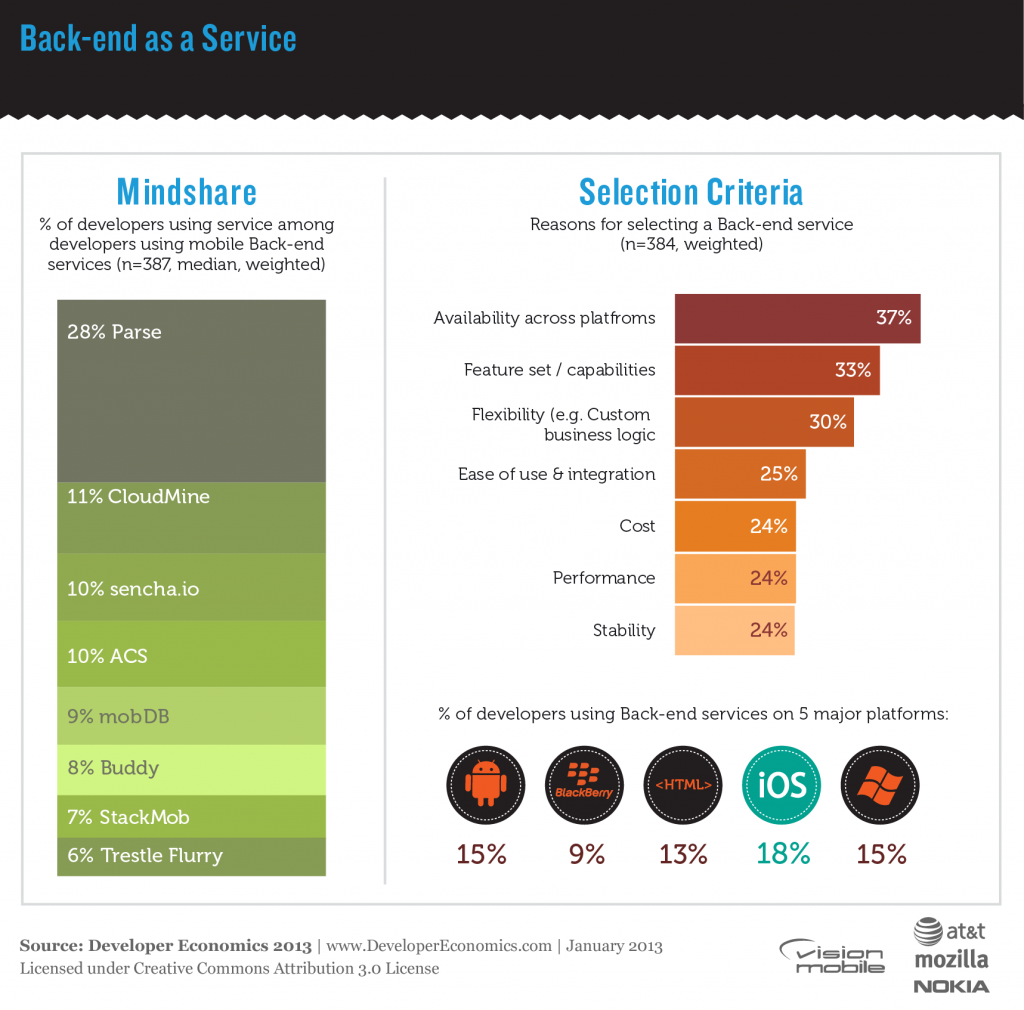 Parse in the lead

The clear leader in the BaaS sector is Parse, considered by many as the de-facto BaaS provider and used by 28% of all BaaS users, followed by enterprise-focused CloudMine, used by 11% of developers. Sencha.io and Appcelerator, both commanding a 10% share among developers using BaaS, are solutions that are well integrated with their corresponding development frameworks (Sencha and Appcelerator) and therefore not directly competing with services such as Parse or StackMob. While the BaaS market is crowded, services address different niches that differentiate them among competitors. As a result we have yet to see any service dominating the sector to the extent observed in other developer services such as advertising or user analytics.

While the core features may be common among BaaS providers, there are significant differences and advantages to each of these services that may make the selection easier. For example, exporting data may not be available on all services so if this is a key requirement, then a number of these services can be ruled out. Developers often find BaaS restrictive for their application requirements so several BaaS providers such as Parse, CloudMine, StackMob and Kinvey allow developers to implement custom business logic. However, developers frequently opt for a custom-built backend solution rather than a BaaS for greater flexibility.

The main selection criterion for developers is, as in most third-party developer services, availability across platforms. However, the richness of the feature set is almost equally important as is the flexibility of the service, e.g. the ability to implement custom business logic. Ease of integration and use, stability and performance are important to 25% of developers using backend services.

Another important aspect of backend services is the pricing flexibility, i.e. the way costs scale with usage. Many developers whose apps experience a sudden surge in user base may find it extremely difficult to scale their costs as usage grows: a free service using a third-party backend that suddenly amasses hundreds of thousands of users will incur significant operational costs as access to the backend rises with the number of users. Developers should keep this in mind when designing their apps and backend service providers should aim to align pricing strategies with developers’ business models.

The backend service sector is relatively young and expected to grow as developers familiarise themselves with such services and realise their potential. At the same time, there is much room for improvement as BaaS providers better understand and adapt their services to developer needs such as flexible and customisable business logic.

Which BaaS services are other developers using?