For the last two and a half years I’ve been building and selling apps directly on the iOS App Store, however only in 2014 I committed to some substantial effort on this. I’d like to share some numbers about my experience last year and draw some insights about what things went well and which ones didn’t.

Hopefully this analysis will be useful to others and will give me some insight about where to focus in 2015 to grow my app revenue.

How do you monetize your apps? Take the Developer Economics Survey and let us know. You may win awesome prizes and gear.

January 2014 brought along my most successful app so far: My Oyster. This app has been in development since October 2013 and even though it had a rough start on the first few months of the year, it is now my most consistent app in terms of downloads and revenue. Along with it, I started selling My Oyster Pro as a 69p ad-free alternative as I wanted to evaluate how well the freemium and paid pricing models would work for the same app. As it turns out, this paid version contributes to sales figures comparable to the ones of the freemium app.

Alongside this, I have been working on improving Camera Cube, which has been live since 2012 and takes the second spot for this year on revenue. Most notably, I released a major update with iOS 7 compatibility in July and added support for iPhone 6 and 6 Plus in December.

In August, I also released Perfect Grid as an iOS port of a simple puzzle game I previously made for Android.

Finally, in November I launched Pixel Picker, my first app written in Swift!

Alongside these new entries, my two old apps Puzzle Camera and Camera Boom are still live on the App Store, however I have not been updating them this year. 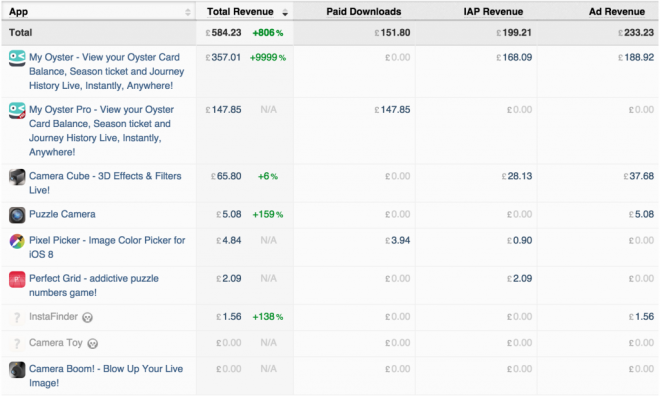 The first important observation is that 86 % of my total revenue comes from the My Oyster and My Oyster Pro apps which both went live in January and brought in 504.86 £ by the end of the year. Overall the freemium version accounted for 70% of these sales (fairly equally split between in-app purchases and ad revenue) and the paid version for the remaining 30% of sales.

This shows that the choice of differentiating my revenues across advertising, in-app purchases and paid downloads has paid off and I plan to keep all these streams going for My Oyster in the future and try them with my other apps as well.

The graph above shows how my revenues have changed over time during this year. For various reasons, I had to remove My Oyster from sale during the January, February and April timeframes, and this shows clearly in the revenue graph.
For the rest of the year, revenues have been varying between 1.5 to 2£ per day on average and peaks of 4 to 6£ per day.

In 2014, the costs of running my app business have been as follows:

The biggest expense has been some outsourcing work I’ve done to create UI artwork for my apps, however this was necessary to create some high quality UI elements and I’m happy with it.

This year I have tried a few marketing strategies to give my apps more visibility. These three have been the most effective:

Additionally I have been spreading the word about new releases of my apps on Twitter and Facebook, however I haven’t noticed an increase in downloads as a result.
Writing to bloggers to request a review for My Oyster also proved ineffective and a big time drain so I’m not going to invest more effort on this going forward.

Overall, I have been quite impressed at the number of downloads that a high traffic site like Hacker News can generate, however in my experience this only helps in getting a spike in downloads. I haven’t yet found a way to sustain high download numbers over time, other than through paid advertising which is an unsustainable model given my current ROI.

Going forward I’d like to share my apps on other high traffic sites such as Product Hunt and Reddit, as well as trying other advertising platforms.

So far, My Oyster is the only app that shows promising engagement metrics with around 5000 MAU and good retention rates:

Having around 640 daily active users and an average session duration of over 5 minutes, My Oyster performs much better than my other apps in terms of ad impressions and revenue. 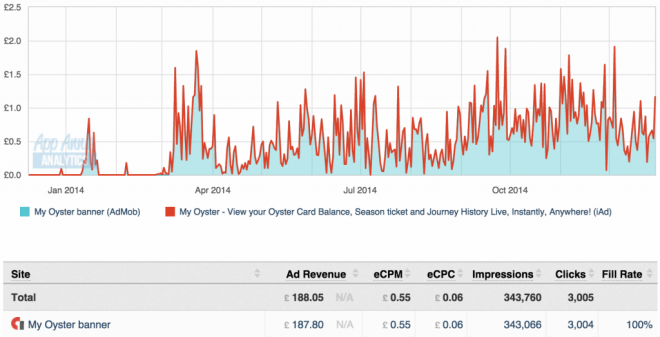 As outlined in the graph above, My Oyster received 3000 clicks at a cost per click of 0.06£. Next year I plan to experiment with Ad Networks other than AdMob to determine if a higher CPC is achievable.

To facilitate user feedback, all my apps have a help/about screen with an option to contact customer support via email.

One peculiar aspect of the My Oyster app is that it lets users check their Oyster card data which comes from a 3rd party website. As the content can be unavailable at times and users sometimes have issues with their accounts, some time is required to answer customer emails, so the revenues from this app aren’t completely passive.
The positive side of this is that a lot of customers get in touch with me directly and their feedback helps me improving the app over time.

As download numbers and engagement metrics are not good for my other apps and I very rarely receive emails from customers that have downloaded them, I can infer that those apps are not as discoverable as I’d like them to be and they don’t generate much interest from customers. From a business perspective perhaps I should focus on My Oyster instead and try to grow its user base and functionality.

As many others have noted, [tweetable]bootstrapping a consumer app business on iOS is hard[/tweetable]. My personal experience so far has been that from a purely financial standpoint this is unsustainable and I should be investing my time in something more lucrative like consulting, which at the time of writing brings in 30x to 50x more revenue per hour worked.

However, I believe there are a lot of intangible benefits in making and publishing apps:

In 2014 I was hoping to hit and maintain 100 £ in revenue per month. I have missed this mark by about 50%.
As most of my revenue came from the sales my My Oyster, I plan to focus on further developing this app and try a few more marketing channels to improve its visibility.

While I plan to do some more independent app development in 2015, my app business so far has struggled to take off and I feel that I could invest more of my time in other relevant activities, including:

Time will tell how things will go, but I feel very privileged to be an iOS developer in 2015 I can’t wait to build more products and awesome stuff this year!

Which skills do you want to develop? Take the Developer Economics Survey and we will compare your skills to the global average. You can work on those skills and maybe get your lucky break.