back to blog
December 12, 2012
Is the Era of Microtransactions in Free Mobile Games Over?
byStijn SchuermansinBusiness

W3i, the in-app offer exchange provider, released a report on December 6th showcasing recent trends in mobile app monetization. The W3iNSIDER Report breaks down data from its hundreds of game developer partners and 66 million monthly active users across iOS and Android.The data shows that smaller microtransactions ($0.99-$1.99), long thought to be the backbone of the freemium model, actually contribute significantly less revenue to mobile games than more expensive in-app purchases that range from $9.99 to $19.99.

When surveying the in-app purchase price points and how they contribute to the overall revenue of a sample of games, W3i found that, on average, 47 percent of total revenue comes from purchases costing $9.99 to $19.99. Smaller purchases from $0.99 to $1.99 only contribute an average of six percent to total game revenue. 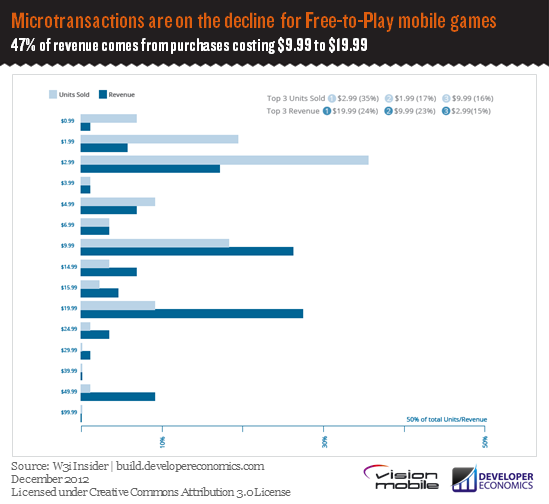 W3i is also reporting in-app purchasing trends from around the world:

“Although the U.S. learned about freemium gaming from Asia, it’s apparent that Americans are taking their own approach to it,” says Robert Weber, co-founder of W3i. “Where mobile games in Asia still depend on microtransactions, U.S. gamers play more like whales- spending larger amounts of money in mobile games.”