back to blog
December 24, 2013
4 Reasons Not to Build Enterprise Apps
byMark WilcoxinBusiness 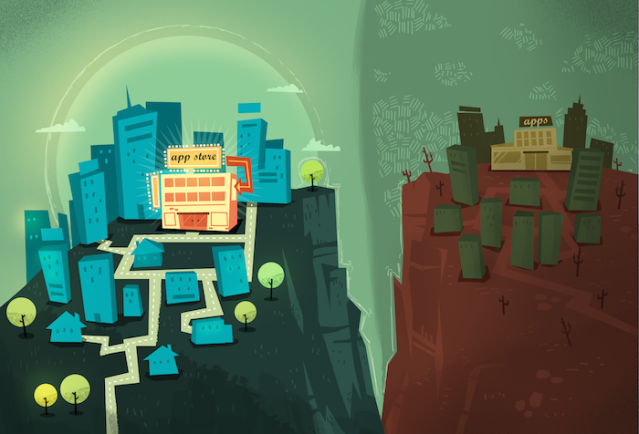 Do you want the indie developer lifestyle, or to build a company? What sort of contact do you want to have with your customers? Do you like consulting work or do you prefer to build your own products full time? Do you have a strong development platform preference? Depending on your answers to these questions you might find one of the 4 reasons below keeps you focused on consumer apps for the foreseeable future.

The creation of the app stores enabled vast numbers of individual developers to create and monetise their own apps. Amongst the revenue earning developers targeting consumers, almost 43 percent are in one person companies and practically all of those don’t involve anyone else in development. Of the developers building apps for enterprises, only 13.3 percent are in one person companies and those are almost exclusively doing contract work. The one person enterprise development companies earn 24% more revenue than the equivalents building consumer apps but it’s definitely not the independent developer lifestyle they’re living. In general the enterprise developers earn more than those developing for consumers at every team and company size, with the difference increasing with team size up to the 500 employee mark. Above that revenues from app development per person drop significantly, although on both sides a lot of large companies developing primarily for reasons other than earning revenue are included here.

As you can see from the charts above, enterprise app developers tend to work in larger companies than those targeting consumers. There’s also a bigger company size to team size ratio. The difference here is likely to be sales, marketing and support teams. In general, larger customers need more direct contact. In the consumer apps space it’s possible, although unlikely to be successful, to launch an app and sell it without ever having contact with anyone that uses it. However, although the costs of direct sales staff may seem high, consumer apps with large revenues and user bases typically pay to acquire a decent fraction of users (e.g. via in-app ads, Facebook app install ads, cross-promotion networks). We don’t have any data to compare the cost of sales for these developers but I wouldn’t bet that the average cost of sales as a fraction of revenue for the successful consumer app developers was significantly lower.

Whilst subscription revenue is by far the best earner for consumer app developers, it is one of the worst revenue models for enterprise developers. In the enterprise market per user/device licensing and other sales outside of app stores is a key revenue component for most successful businesses. This aspect of a business can often be very unattractive to developers.

On average [tweetable]enterprise app developers earn a much greater fraction of their revenue from contract work[/tweetable] (consulting). The most successful enterprise app businesses earn 25-75% of their revenue in this way (we only have 25% bands). It’s likely that there’s a lot of custom integration work involved in selling to larger enterprises. Even those selling to SMEs often offer customizations.

Developers who consider their apps an art-form and build them primarily to earn a living doing something creative they love will probably want to stay away from areas where a lot of contract work is involved. Those same developers are also not very likely to be inspired to help automate business processes or other similarly mundane but useful enterprise app functions.

There are some very major differences in the revenue models and revenues of enterprise app developers depending on their primary platform. The really big revenues are currently being earned by HTML5 developers (> $100k per developer per month). Next highest revenues are for iOS developers (a little over $50k per developer per month) but it seems that [tweetable]a lot of iOS app enterprise development is currently outsourced[/tweetable], since more than 70% of these earn >75% of their revenue from contract work and 40% earn 100% of their revenue in that way.

Compared to these two, the Android developers are the poor cousins. Despite having a much wider range of revenue models, their average revenue per developer is much lower (about $14k per month). Enterprise development still pays very slightly better on Android than building consumer apps but given the other trade-offs discussed above, it might seem like a relatively poor deal.

Running out of excuses?

When we published the last article, showing that enterprise developers make 4 times as much revenue as those targeting consumers, a lot of responses suggested that this difference was all in the large enterprise sales market and required large direct sales teams. While there is definitely some advantage to scale, this is certainly not the case. Not all enterprises are large and there’s a very big market of SMEs looking for mobile software to make their businesses more efficient or convenient. Although the most profitable enterprise app development companies are in the 51-500 employee range and solo developers are only marginally better off targeting enterprises, a 2-5 person company makes more than 4 times as much revenue on average by choosing to build enterprise apps. The 2-5 person enterprise app business is much more likely to be building HTML5 hybrid wrapper apps rather than the native iOS or Android apps of a similar sized consumer focussed business. They are also likely to be spending more of their time (although far from all of it) doing contract work. If neither of those things bothers you then it might still be worth considering the enterprise market for your next app.