back to blog
April 08, 2015
The Rise of Mobile C#
byMark WilcoxinLanguages

Microsoft have been struggling to get traction with their mobile computing efforts, with Windows Phone stuck at around 3% share of the smartphone market. Windows 8 is doing a little better in the tablet market but is still a distant third to iOS and Android. Despite losing in the platform wars, Microsoft’s developer ecosystem is still strong and they’re not showing much sign of wanting to give up their tools. The latest Developer Economics survey showed that 38% of mobile developers were using C# for some of their work and 16% use it as their main language. Those developers are not all focused on Microsoft platforms by a long way. They’re not all building games with Unity either. So what are they doing? 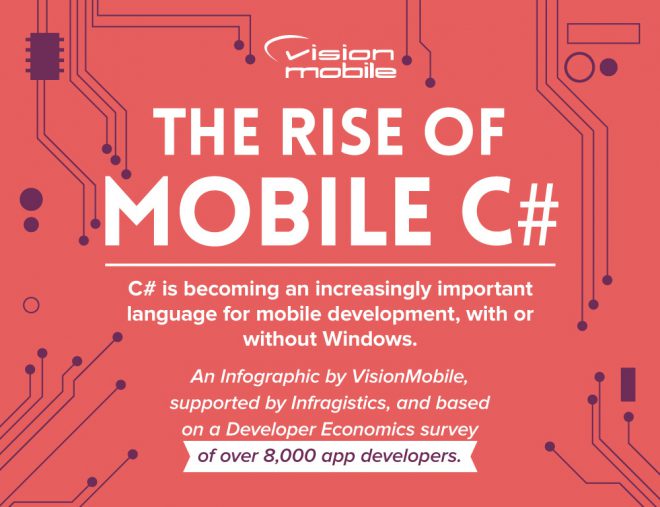 Not just Windows Phone, particularly not for pros

Unity is by far the most popular engine for mobile games, in fact in the Q3 2014 Developer Economics survey a massive 47% of game developers were using it for some of their projects. C# is the most important language in the Unity developer ecosystem, although there are two other languages supported (UnityScript – a JavaScript variant with type annotations – and Boo – a statically typed language with Python-like syntax). However, a lot of developers are using Unity to build games in their spare time. When we look at the full time pros we find that games are only the 4th most popular category of app. The top 3 categories are Business & Productivity tools, Enterprise-specific apps and Utilities, all staples of the enterprise-focused app developer. Developers are either building these apps for Microsoft platforms, using Xamarin to reach iOS and Android with them, or both. Indeed it’s the combination of a familiar language (and code portability) and tooling for many enterprise app developers with the cross-platform reach they can get with Xamarin that’s making C# such a popular choice in this area.

A lot of popular cross-platform tools for mobile development only support iOS and Android. As such, for those also wanting support for Windows Phone and possibly desktop Windows and Mac too, Xamarin is one of very few serious options. That said, it’s not just a default choice. Using Xamarin.Forms, developers can get the write-once-run-anywhere efficiency that drives many decisions to use a cross-platform approach. The downside to this approach is that it can give a lowest common denominator of functionality; not allowing developers to really optimise for the unique features of each platform. However, Xamarin also directly wraps the native platform APIs, allowing developers to call anything in the native SDKs. They can even automatically create bindings for popular third party libraries on each platform. The other key reason developers often go with a native rather than cross-platform approach is performance. However, a recent independent performance test (by an early Google engineer) showed Xamarin’s compiler produces raw performance that’s comparable to native on iOS and Android. Raw performance isn’t the only thing that counts of course – a garbage collection pause causing a stutter in your animation is jarring, however fast the the code is executing otherwise. Enterprises customers will usually put up with mild inconveniences of that nature to get the cost savings and maintenance benefits of a single code base across platforms though.

Possibly the best measure of the success of C# on mobile devices is the revenues of the developers using it. Whether you believe the same level of smoothness in the user experience can be achieved or not, it only matters if it costs users and revenue. Here there is no room for debate. The revenues of full time professional developers whose main language is C# are comparable to, or better than, those of other developers targeting the same primary platform with the native language. For example, the revenue distribution for C# developers on iOS is extremely similar to that for Objective-C developers and the average revenues are higher. This is both because there are more C# developers earning more than $10K (46% vs 36%) per month and while there are slightly fewer earning more than $100K per month (16% vs 17%), a significantly greater fraction of those using C# earn more than $500K per month (14% vs 6%).

This is not to suggest that C# is somehow a better language for targeting iOS than Objective-C. This is correlation and not causation. The cause of the better revenues is that the C# developers are much more likely to be targeting enterprises than the Objective-C developers and that’s where the higher revenues are most likely to be found. There’s an enormous pool of developers trained in C# and related Microsoft technologies. A lot of them are working on desktop enterprise apps or the server side. As it becomes increasingly clear that C# is a viable language for successfully delivering cross-platform mobile solutions, C#’s rise on mobile looks set to continue for several years yet.

The Rise of the Mobile C#