back to blog
July 21, 2014
State of the Developer Nation: The App Economy Consolidates Before the Next Gold Rush
byMark WilcoxinBusiness

Our 7th Developer Economics survey broke all records again, reaching more than 10,000 app developers from 137 different countries. The full report with the survey findings has just been published and is available for free download!

The view of the app economy that they collectively provide is one of consolidation. Developers are focusing their attention on fewer platforms and app revenues are becoming increasingly concentrated amongst the top publishers. Consolidation in the developers tools sector may also be partly responsible for the decline we see in tools usage. This is also reflected by the platforms, with BlackBerry moving their focus away from consumer smartphones and Microsoft killing their recently acquired Asha and Nokia X platforms to double down on Windows Phone. Fortunately there are several indicators that the next gold rush is just getting started.

Platform Wars in the App Economy

On a global level the platform wars are ending with iOS claiming the majority of the high-end device market and Android winning almost everywhere else. This results in [tweetable]Android leading in developer mindshare at 70% with iOS a clear second with 51% of developers targeting the platform[/tweetable]. However, we’ve been tracking this metric since 2010 and there is a new pattern. [tweetable]Windows Phone was the only platform to gain developer mindshare, rising steadily to 28%[/tweetable], despite failing to gain device market share. Although Android and iOS lost developer mindshare, this was not fewer developers prioritising either platform, rather more developers are now choosing sides. The average number of platforms a developer targets has fallen from 2.9 to 2.2 over the last 12 months, with more than 40% only targeting a single platform. 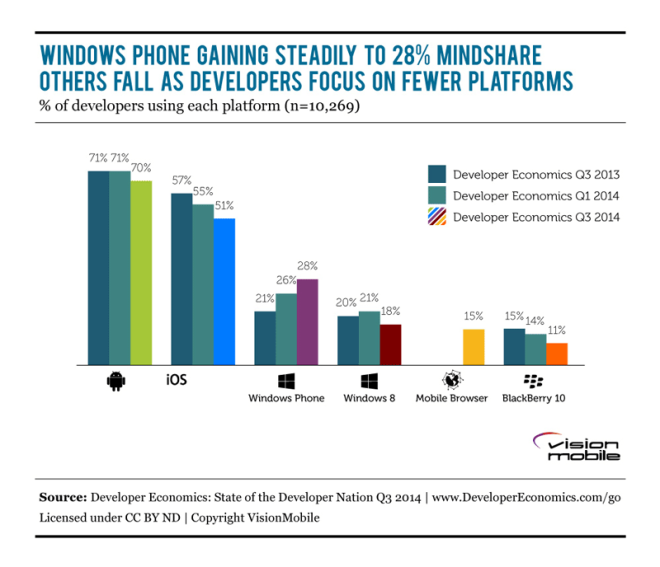 BlackBerry 10 is rapidly leaking developer mindshare, down to 11%, having failed to gain traction with consumers. Meanwhile, it’s now becoming increasingly clear that [tweetable]the future of HTML5 lies beyond the browser[/tweetable]. Although HTML5 is used by 42% of developers as a technology for app development, only 15% still target mobile browsers as a distribution platform.

A surprisingly high 47% of iOS developers and 42% of Android developers are using something other than the native language on their platforms. While hybrid apps are the most popular non-native option for building Android and iOS apps, they’re only used by 13% of developers. Hybrid apps are HTML5 apps with a native wrapper, typically created by tools such as Cordova. 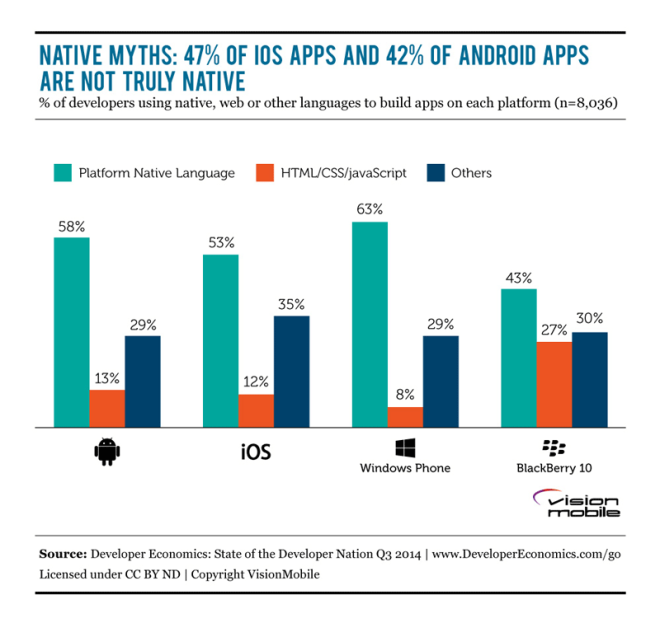 The majority of app businesses are not sustainable at current revenue levels. [tweetable]50% of iOS developers and 64% of Android developers are below the “app poverty line” of $500 per app per month[/tweetable]. 24% of developers interested in making money earn nothing at all. A further 23% make less than $100 per app per month. The overall app economy, including all revenue sources not just the app stores, is still growing but the revenues are highly concentrated. At the top end of the revenue scale there are just 1.6% of developers with apps earning more than $500k per month, collectively they earn multiples of the other 98.4% combined. 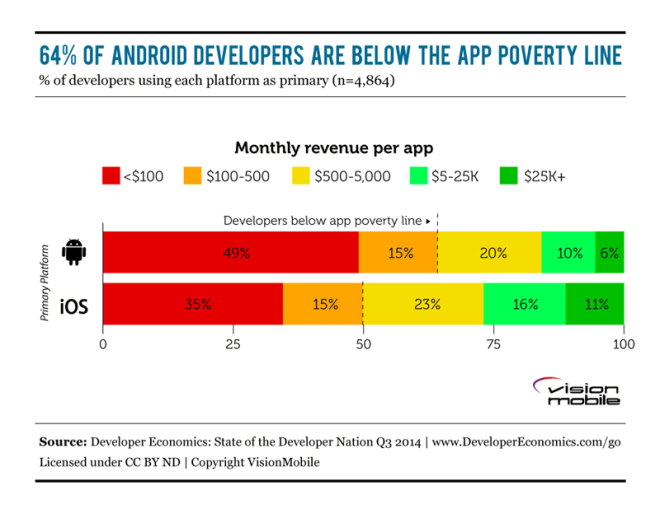 State of the Game Developer Nation

Games dominate app store revenues, yet most games developers struggle. [tweetable]33% of developers make games but 57% of those games make less than $500 per month[/tweetable]. Experience breeds success in the games market. The more games a developer has shipped the more likely they are to be financially successful. However, 70% of games developers have shipped less than 4 titles.

Games is a multi-platform world with the average games developer targeting 3 platforms versus 1.75 platforms for non-games developers. Multi-platform games benefit from cross-platform game development tools with Unity by far the most popular, used by 47% of developers. The next paid tool, Adobe Air, comes a distant second at 15%. Apple and Google’s latest graphics technologies launch a battle for the richest gaming experiences. Third party game development tools like Unity and the Unreal Engine will be key to developers exploiting these capabilities. 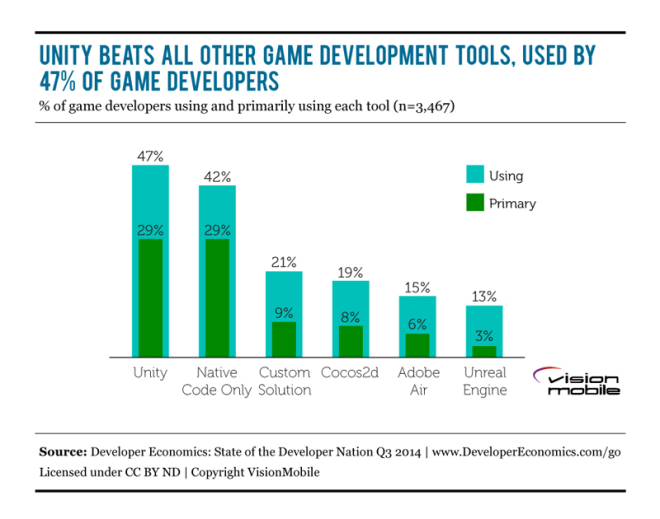 Tools of the App Developer Trade

Third-party tools are a critical part of successful app businesses. There’s a strong correlation between tool use and revenues, the more tools a developer uses, the more money they make. We successfully predicted the rise of the Mega-SDK, where consolidation amongst tools companies allows developers to integrate multiple tool categories from a single vendor. Despite this, tool use is declining, partly due to the rapid influx of new mobile developers. These new developers are typically not aware of the tools that are available and thus reduce the average usage levels. 26% of developers that are interested in making money don’t use any third party tools, up from 14% just 12 months ago. 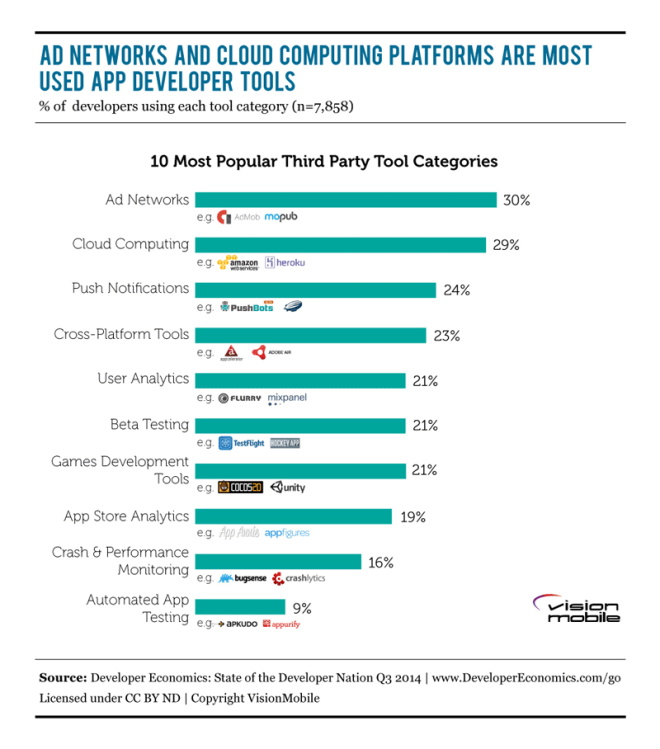 The most popular category of tool is Ad Networks, with 30% of developers using them. However, this is one of the few tool categories that is not associated with higher than average revenues. More experienced and successful developers show a preference for Cloud Computing platforms, such as Amazon Web Services or Microsoft Azure, with 40% of those with 6+ years experience in mobile apps adopting them.

Enterprise Apps – The Next Gold Rush

[tweetable]Enterprise apps are already the safest bet in the app economy and they’re only just getting started[/tweetable]. 67% of mobile app developers primarily target consumers and 11% target professionals directly. The 16% of developers who target enterprises are twice as likely to be earning over $5k per app per month and almost 3 times as likely to earn more than $25k per app per month. 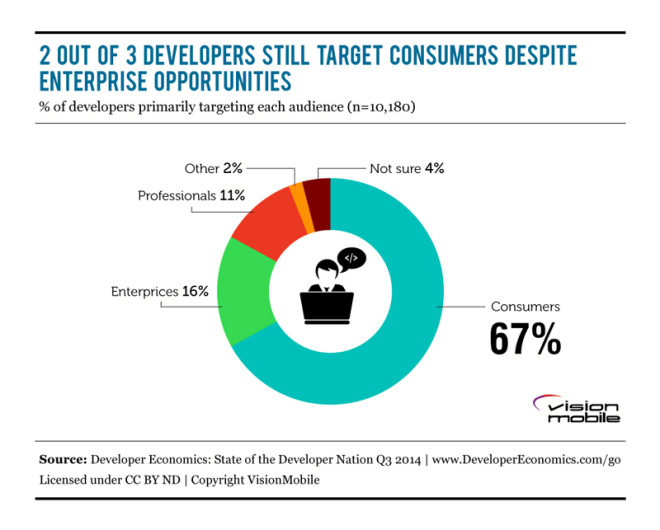 Penetration of enterprises with mobile devices and solutions is already broad but not yet deep. Currently iOS appears to be winning the battle for enterprise adoption and revenues. Yet many developers are focusing on the wrong platform with 10% more enterprise developers targeting Android than iOS. Although enterprise apps have been a historical strength for them, Microsoft and BlackBerry are seeing very weak adoption for their new platforms amongst enterprise developers due to lack of demand from enterprises.

This battle is in the very early stages. Microsoft is re-focussing on their core competence in productivity software while Apple and Google move rapidly to embrace enterprises. Google’s integration of Samsung’s Knox platform into the Android platform is a major step forward. Meanwhile Apple’s new partnership with IBM gives them a strong proposition in all the major vertical markets. These moves will undoubtedly drive greater adoption of mobile technology in enterprises and create countless opportunities for developers to help re-think the way we work.

For more information, download the full Developer Economics Q3 2014: State of the Developer Nation report and check out the war between the European and the Asian app economy.