back to blog
January 31, 2013
Multi-Platform Developers Are Better Off
byMark WilcoxinBusiness

Our latest survey shows a concentration of developer attention around the iOS/Android duopoly. Given the reach and revenues available on the two leading platforms compared to the competition, it’s unlikely that developers will find significant success without targeting one or both of them. However, our survey data also shows that developers should not limit themselves to those two platforms. There is a strong correlation between average revenue and the number of platforms targeted. 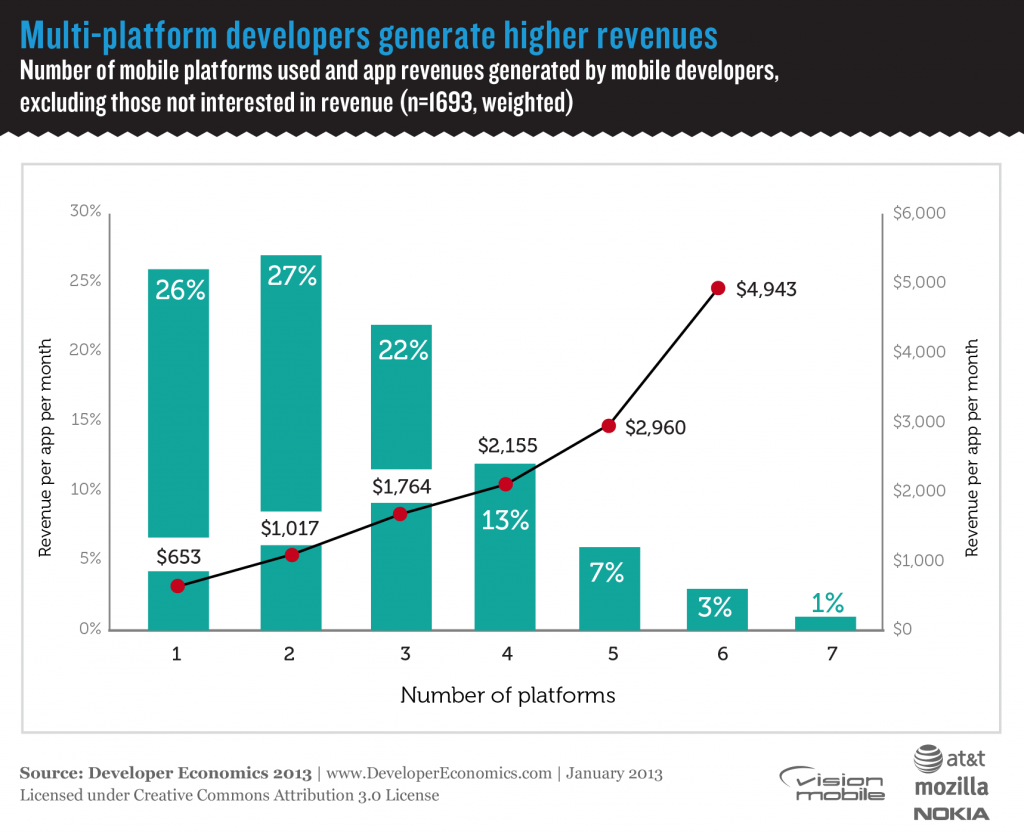 74% of developers use two or more platforms concurrently. At the same time, developer platform choices are now narrowing. On average mobile developers use 2.6 mobile platforms in our latest research, compared to 2.7 in 2012 and 3.2 in our 2011 research. The Android-iOS duopoly in smartphone sales is gradually creating a concentration of developers around these two platforms: 80% of respondents in our sample develop for Android, iOS or both, making them the baseline in any platform mix. Developers that do not develop for one of these two platforms generate, on average, half the revenue of those developers that do, leaving little doubt as to the concentration of power within these two major ecosystems.

In our Developer Economics 2013 survey of over 3,400 developers we found that 49% of developers use just one or two mobile platforms concurrently and 75% use up to three mobile platforms. The number of platforms developers use depends to some extent on which is their lead platform. In mobile development, loyalty to one platform is not something that pays off. Our research shows that the revenues are higher when using more platforms. For example, an iOS developer porting an app on Android is likely to experience some growth in revenue. At the same time, for developers working on four or more platforms, higher revenues are probably the result of extending an already successful app to more platforms. Obviously, this is not something that all developers can afford to do; it is a strategy more suited to large publishers or commissioned developer teams that are large enough to support a number of platforms.
[doritos_report location=’DE13 Article – Mulit-Platform’]