back to blog
February 14, 2013
HTML5 vs Native – What are the tradeoffs?
byMark WilcoxinLanguages

In our latest developer survey we asked developers who use or plan to adopt HTML5 why they do so and also what the technology needs to compete with native alternatives. The results show a tradeoff of increased portability and lower development cost against capability, in the form of reduced API access and a poorer development environment. In this scenario, the key to success with web technologies is taking advantage of their strengths in areas where their weaknesses are less of a handicap. 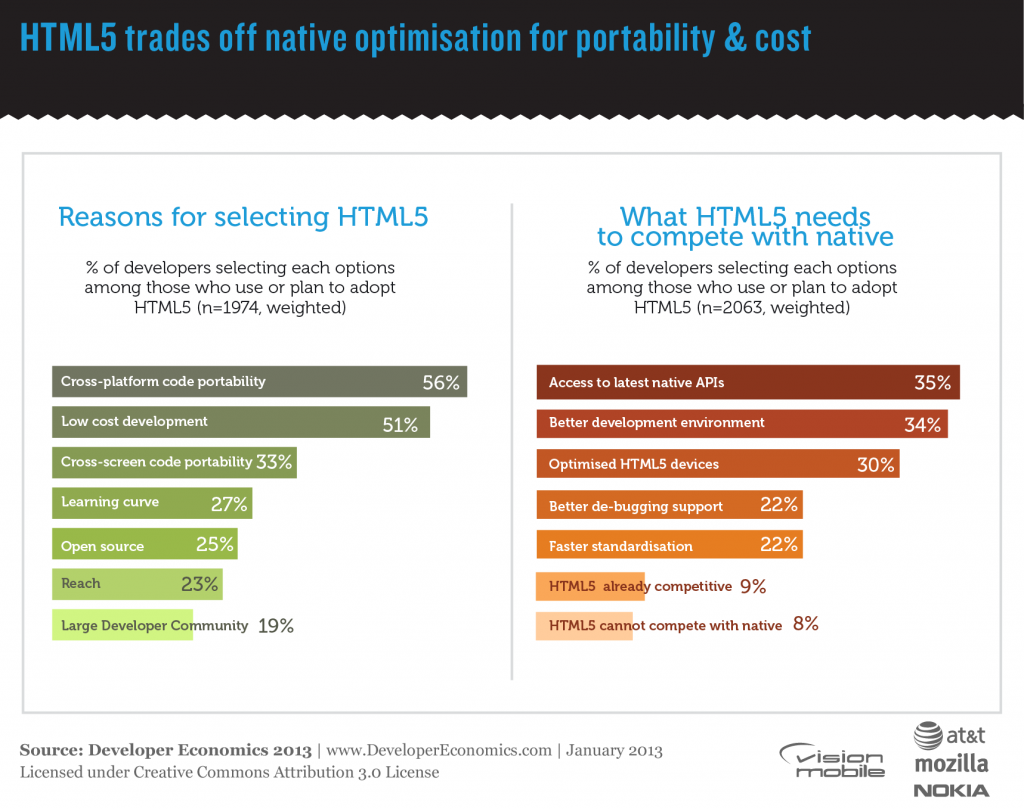 We asked developers that use or are planning to use HTML about the reasons for platform selection. The majority indicated code portability as the main incentive for using HTML5. Low cost development is the second driving force for HTML5 adoption, highlighted by 51% of developers. HTML is still an “extension platform” in that only 26% of developers who use it consider it their main platform. We asked developers that use, have used or are planning to use HTML what they think HTML5 needs to compete with native platforms. Access to native APIs is a top challenge with 35% of developers indicating this as a critical success factor. HTML5 will always be a step behind in support for native APIs, given that cross platform tools and browser vendors will always have to implement support for a new API after it is released to developers by the platform vendor. In addition, the HTML5 development experience is subpar, with developers indicating that a better development environment (34%) and better debugging support (22%) are needed. More importantly, optimised HTML5 devices were not seen as important as the native API access or dev environment. This leads us to conclude that HTML proponents such as Facebook, Mozilla and Google should focus on cross platform tools and development environments on at least equal levels as they focus on full platform efforts like Facebook Platform, Firefox OS and Chrome OS.