back to blog
November 17, 2014
How to make money with apps
byMark WilcoxinBusiness

A major theme in our State of the Developer Nation reports is an increasingly gloomy picture of typical developer revenues. [tweetable]The vast majority of developers make very little money from their apps[/tweetable]. However, there are a lot of developers out there and a decent fraction of them make a good living, some are building thriving businesses on the app stores and a few at the top are even creating multi-billion dollar companies. So, what’s different about the developers that are succeeding financially versus those that are living in app poverty? 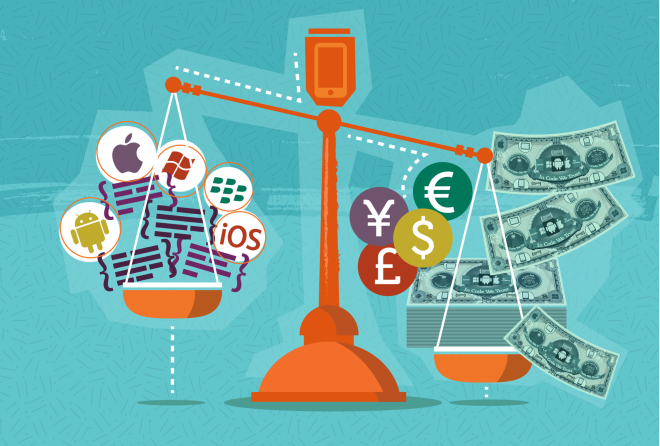 Are you making money from your app? Let us know and you might discover new tools that can make you even more profitable. Start here.

There are two major risks when analysing groups of successful individuals or companies to try to work out why they succeed when others fail; the first is survivorship bias – ignoring the many failures that may have done exactly the same things, the second is confusing correlation with causation. In the latter case there are many things that developers do because they have a successful app, like porting it to lots of other platforms, that are completely unrelated to how they became successful in the first place. [tweetable]There isn’t a magic formula for success on the app stores[/tweetable] but we can try to avoid falling into these traps by looking at factors that might increase your chances of success.

In our last report we showed two major factors that correlate with higher revenues, targeting enterprises rather than consumers and using 3rd party tools. The former is almost certainly a direct cause of financial success, the later is probably indirectly related, tool use indicates a more sophisticated approach to app development as a business. There are many more factors that can make quite a significant difference to the chances of financial success with apps, so lets take a look at some of them.

As our benchmark we’ll use the rather modest (but challenging) goal of making more than $5k per app per month. This is a revenue level that would allow a single app to support a developer in the US or Western Europe but is below a typical employed developer salary in those places. In some countries it would support a whole team living very comfortably. How much more likely are developers to be earning above this level depending on which platforms, categories and device types they target or what revenue models they use?

It’s been widely reported that iOS is still ahead of Android for revenues but there are suggestions that Android is closing the gap. Looking at overall revenues from the platform or the earnings of the very top developers, this may be the case. Some even earn more on Android than iOS. However, revenue is more concentrated at the top on Android than iOS, so the chances of earning above the $5k per app per month level are still much higher for those who primarily target iOS. Despite the decreasing popularity, targeting the mobile browser is quite far ahead of building Android apps too. In this case though, many targeting the mobile browser may already have successful desktop web businesses, so this might not be so easy to replicate for those starting new businesses. Windows Phone and BlackBerry 10 are both offering very low chances of a decent financial return as primary platforms. Note that this doesn’t imply that there’s no revenue available on either of these platforms, it could all be going to apps that succeeded on other platforms first and then ported.

It’s no surprise to see enterprise apps and business and productivity software at the top of the high earning app category charts. What’s more interesting is the “other” category between them. Developers who seek out and dominate niches outside the standard app categories are doing very well; it’s not the route to a billion dollar company but it’s a smart strategy for a small business. Despite the many reports of fitness trackers ending up unused in drawers after a few months, health and fitness related apps are doing quite well. It’ll be worth watching how the major platforms health and fitness data platforms impact this category. The success of the communications and social networking category at this revenue level is slightly counter-intuitive, this is a category with significant network effects favouring a few big winners. It seems that this is such popular use case for mobile devices that there’s room for a lot of developers to add value. To contrast with these, the categories at the bottom of the list are Kids (16%), Games (17%) and Education (17%). These bottom categories are pulled down by their popularity with hobbyists, giving full-time professionals targeting these categories a lot of free competition.

Smart TVs and set-top boxes are a surprise leader in terms of device types to target first. Only a tiny fraction of developers in our survey had these as their primary target, so this isn’t a reliable sample. It’s hard to get visible on TV platforms and you usually need content, so this might not be a strategy to emulate. The Internet of Things is also unexpected at number 2 considering how immature the market is. It may be the case that hardware sales are involved in many of the higher revenue earning businesses here, in which case there are much higher costs associated than for pure software businesses. While smartphones are a massively more popular primary target than tablets, the chances of an app earning above the $5k per month level are quite a lot higher on tablets. There are likely to be several factors involved here; less competition, more tablet apps targeting enterprises and with the reliance on free apps making most of their money from a small fraction of users, it can pay to provide an optimum experience for the heavy users on a larger form factor. This last point is valid right up to the highest revenue levels – Supercell have built their games tablet first with a scaled down experience on smartphones.

At the top of the revenue model tree is per device royalties or licensing fees.This is likely to be a mixture of enterprise apps and successful apps that have managed to get pre-installs on devices. This is a highly desirable revenue source but certainly not available to all apps. The next best is contract work at 30% of developers earning more than $5k per app per month. Contracting gives a decent chance of making higher revenues but of course the app belongs to whoever it is built for, so the upside is also very limited. At the same time this is by far the lowest risk model, with twice the chance of making more than $5k per app per month than the worst model, advertising. Subscriptions and e-commerce are tied for third place at 29% and affiliate and CPI programs are not far behind at 28%. These models are often harder to implement but our data suggests that the effort is likely to be worth it if they can fit the app concept.

Finally, an interesting comparison towards the bottom end of the revenue model scale is paid downloads (18%) versus free apps with in-app purchases (19%). There is very little difference between the two revenue models at this level of revenue. This is a very strong contrast with the total amount of revenue earned through each of those models. This probably reflects the fact that getting a freemium model with in-app purchases to work is difficult – there’s a very big risk of just giving a free app to a massive majority of users and getting no more paying users than for an equivalent paid app.

There are a number of different ways you can target your apps and select your revenue model to increase your chances of financial success. What we haven’t analysed here is how these combine. Some of them probably won’t, for example, tablet first and iOS first is a good combination, but tablet first and Android first probably isn’t. Our analysis in the State of the Developer Nation report has also shown that some of these combine in an additive way, for example, building enterprise apps for iOS has very high chances of financial success.

Take the Developer Economics Survey, test your skills and compare them to the global average. You can work on those skills that need improvement and become more competitive. Cool, right?