back to blog
June 26, 2014
Building a business not just an app? Start with the revenue model
byMark WilcoxinPlatforms

The number of app developers using business models that don’t rely on app store payments is increasing. In some cases this is sophisticated app developers adapting to the market. In many cases it’s simply a greater number of existing businesses starting to use apps as a channel to reach potential customers. We can use the data from our Q1 Developer Economics survey to examine which strategies carry the most risk and which have the greatest chances of success. Could you use one of the more successful models for your next app? 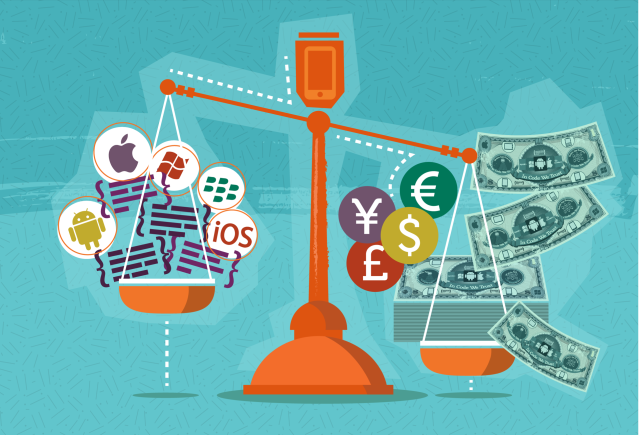 We asked developers to tell us all of the revenue models they use and also whether their business was loss making, breaking even, making a slight profit, or generating comfortable profits. Revenue model popularity and a sample of profit & loss distributions are shown below.

Build apps for other people

[tweetable]Contracting is the most popular revenue model and also the one associated with the second lowest probability of making a loss[/tweetable] and third highest probability of comfortable profits. Of course, contract work also has strictly limited upside – it’s not really possible to build a scalable business around contract work without becoming a global giant consulting company. That said, the [tweetable]majority of developers would be better off if they spent most of their time on contract work rather than their own apps[/tweetable].

The next most popular revenue models, in-app advertising, paid downloads, in-app purchases and freemium are all relying on directly monetising an app. Together they are the four most risky models with the lowest chances of profit. [tweetable]Paid downloads are the least successful revenue model[/tweetable]. Although easy to implement there are very few cases where offering a straight paid download will create a financial success. Even on iOS, despite a still growing user base, the paid download market appears to be contracting fairly rapidly in the face of free app alternatives with in-app purchases. Despite the advantages of the in-app purchase model, it’s still quite far behind other models.

Subscriptions are the next most popular and also relatively low risk and successful. However, implementing subscription based services is usually more complex than selling apps or virtual goods. Many subscription based businesses are simply using an app to sell subscription content. Another interesting possibility for developers in this area is to resell generic cloud services by adding value on top. As very basic (and already well served) examples, re-sell storage by adding document collaboration or photo management features on top.

Providing services that app developers can resell is one model for those selling developer services. Others include tools or services that help developers design, build, market or monetise their apps. This is one of the lower risk models with a good probability of profit. It follows the classic advice that when there’s a gold rush, the best thing to do is sell picks and shovels. There are still plenty of opportunities in this space (where are all the tools that help me prototype animations?) but also others with too much competition (some BaaS providers are already shutting down).

[tweetable]Apps that make money through e-Commerce are the most successful in terms of making comfortable profits [/tweetable]and have by far the lowest risk of making a loss. Most developers using this model had existing e-Commerce businesses and have just added mobile apps as another sales channel. There are some startups with mobile first commerce apps though. More than 50% of developers using this model make comfortable profits related to their apps, so the cost of building apps is more than paid for by sales through them.

Affiliate and CPI programs allow developers to sell other people’s stuff. Using an affiliate program could be selling products related to your app through Amazon. Alternatively, a travel guide app might integrate a flight search SDK that provides a native search experience within their app – the developer gets paid whenever anyone books a flight. Affiliate programs were very popular on the web and their native counterparts are likely to be as well. CPI programs are for selling other developers apps, or at least getting users to install them. The top free-to-play games have extremely high ARPU and as they try to grow rapidly it makes sense for them to pay almost anything less than their ARPU for a new user (since new users boost chart ranking and thus organic installs). Other apps are a good place to advertise apps, so this is likely to be quite a lucrative option until either there’s an oversupply of quality advertising inventory or a crackdown on free-to-play games.

We skipped per-device royalties or licensing in the middle of those last two. Overall this doesn’t have much lower risk than relying on the app stores or ads. However, this is inherently a higher risk strategy with bigger rewards for success. It usually involves building a product for large companies or even OEMs. The downside is that the number of direct customers in the target market is usually quite small. This is usually a model for those with great connections, a lot of funding, or both.

Build a business, not just an app

The app stores made it really easy for developers to sell software to a very large audience for the first time. With over a million apps each for iOS and Android, that is no longer the case. Discovery is hard and larger, more sophisticated organisations are dominating the top charts. If you have a great idea for an app, see if you can find a great revenue model to fit it. If not, try to come up with another idea. Outside of the VC-funded startups, developers that succeed will be the ones that think about where their revenue will come from before they’ve started building the app.

For more information of the success recipe of mobile apps, check out our App Economy Profits report.